This zesty crab and spaghetti recipe is delightfully refreshing and equally works with linguine pasta. It serves two and takes about 15 minutes to prepare and cook. 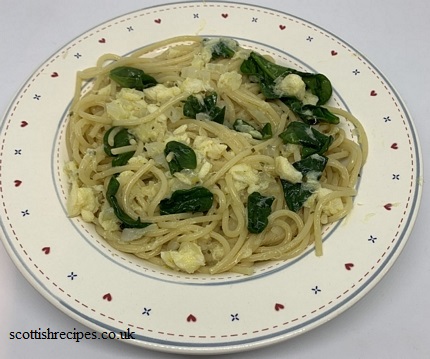 200g of spaghetti.
One tin of crab meat, or fresh crab.
The zest of one lemon.
The Juice of one lemon and one orange.
A small onion.
One tablespoon of olive oil.
One clove of garlic.
A handful of spinach or watercress.
Parsley or basil.

Cook the spaghetti or linguine as per the pasta instructions.

Heat the olive oil in a pan. Add the chopped onion and garlic and heat until the onion is soft.

Add the crab meat and cook for about four minutes.

Add the lemon zest and juices.

When heated through, add the cooked pasta.

Toss with spinach and parsley.

When the spinach is slightly wilted, remove from the heat and serve with your favourite bread.