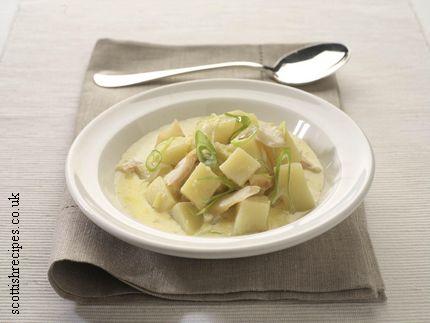 This leek and potato soup is a slight variation of Cullen Skink but with more fresh vegetables and the added ingredient of smoked haddock. The potato smoked haddock and leek soup recipe was devised by Andrew Fairlee the Michelin Star chef at Gleneagles in Scotland and is easy to make and so delicious.


1). Place the haddock, chopped onion, and bouquet garni into a saucepan. Cover with water and bring to a simmer. Skim the surface of any froth and simmer for 5 minutes.

2). Lift the fish from the pan and remove any skin and bones. Flake it and return the skin and bones to the water. Simmer for 20 minutes.

4). Melt the butter in a heavy saucepan, add the washed and sliced leeks, and cook until just soft. Then add the potatoes and cook for another 3 minutes.

5). Add the fish stock and simmer gently until potatoes are tender.

6). Add the double cream and bring to the boil.

7). Add the fish and check for seasoning.

8). Divide into bowls and sprinkle the spring onions on top.

We would like to thank the team at Albert Bartlett for providing this meal idea and photo on behalf of Andrew Fairlie. They recommend using Roosters and you can learn more at www.albert-bartlett.co.uk