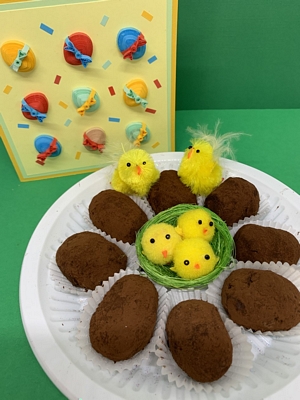 Break the dark chocolate into small pieces and place into a bowl along with the double cream and the butter. Melt over a boiling pan of water or in the microwave for about 30 seconds on full power.

Stir the mixture until it becomes smooth, then set aside for about an hour to cool and set.

Take a piece of the mixture and form into the shape of an egg. Repeat until there is no chocolate mixture left.

Place into a decorative box if gifting for Easter or put into paper cases.