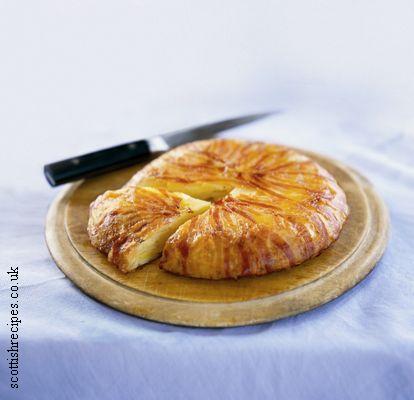 1kg of Rooster potatoes which have been peeled, thinly sliced and washed
15g of melted butter
200g of thinly sliced streaky bacon
100g of grated gruyere
Salt and pepper for seasoning (optional ingredient)

Arrange the bacon slices into the bottom and the sides of the greased pan. Make sure some of the strips overhang the edge of the dish slightly.

Dry the washed, peeled and sliced Rooster potatoes and dry with kitchen towel.

Take about one third of the tatties and place these slices over the bacon. Then sprinkle about a third of the grated gruyere. Repeat this step so that two more layers of tattie and cheese are in the dish.

Now fold over the overhanging bacon onto the top layer of potatoes and cheese. Place the dish in the oven and bake uncovered for 50 minutes.

Before removing from the oven ensure it is cooked throughout by testing the tatties by piercing a knife through the pie. The potatoes should feel soft and the knife gently pass through the dish.


Other cheeses could be used for this but the harder gruyere melts at the right time with the potatoes and blends well to give a mild nutty taste.

We would like to thank the team at Albert Bartlett for providing this potatoes cheese and bacon pie recipe and photo on behalf of Andrew Fairlie. It is recommended that Rooster potatoes be used. You can learn more about Albert Bartlett at their website www.albert-bartlett.co.uk