Traditional pancake recipe with list of ingredients and cooking directions

Pancakes aren't just for pancake day, they are delicious as a snack or for a leisurely breakfast and are easy and quick to make. This makes 4. 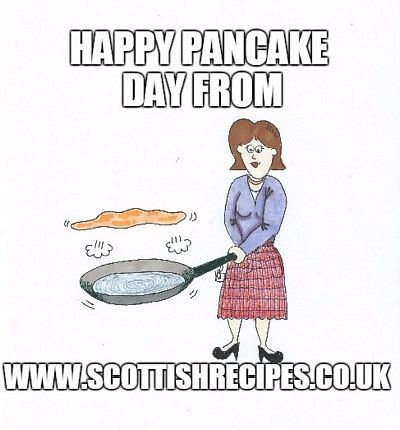 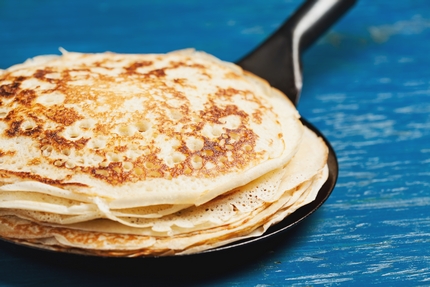 1. Combine the flour with the salt in a bowl and make a wee well in the centre of the bowl and add the egg.


2. Whisk or stir well whilst adding the milk. Pour the mixture into a jug. Alternatively use a food processor to mix up all the ingredients and ensure there are no lumps. This mixture can be safely stored in the fridge for up to six hours before use.


3. Heat a wee bit of oil in a frying pan, ensuring it cover all areas of the pan. Pour some mixture into the pan (be heavy handed if, like me, you love thick pancakes), ensuring it's spread evenly.

4. Cook until one side is a nice golden brown colour and turn over to cook the other side - loons should attempt to flip this over as high as possible to impress the lassies! To tell if it needs flipping or turning look for small bubbles forming on the sides.

5. Cook until the other side is golden brown colour and serve with lemon juice, sprinkled sugar, maple syrup or a favourite topping. 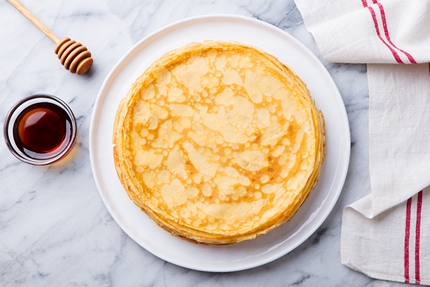 which she calls Shrove Tuesday Pancakes and also serves them to her family on Easter Sunday. She suggests serving them with lemon, sugar, jam, syrup or stewed apple.

, by Lindsay Landis and is reproduced here with kind permission. It makes twelve which should serve four people. She uses optional green food colouring to add to the visual treat of this snack which she describes as

nothing as delightful as a towering stack of fluffy pancakes. 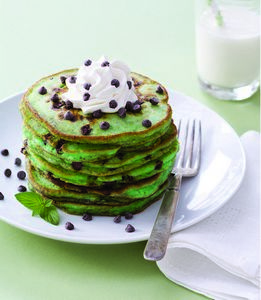 One and a third cups of all-purpose flour

One tablespoon of granulated sugar

Half a teaspoon baking soda

Half teaspoon of pure vanilla extract

Three quarters of a cup of mini semisweet chocolate chips, plus more for the topping

Vanilla ice cream to serve with

Hot fudge sauce from the shops or use that described in Breakfast for Dinner to make your own.


How To Make Pancakes


Sift the flour with the sugar, salt, baking powder and soda into a bowl.

Whisk the buttermilk, egg, butter, extracts and food colouring together in a smaller bowl. Add this to the dry ingredients and stir until they are incorporated. Stir in the chocolate chips.

Heat a large non-stick skillet or griddle over a medium heat. Add half a tablespoon of butter which should sizzle and melt almost straight away.

Ladle a quarter of a cup of pancake batter into the skillet for each one, taking care not tol let them run together.

Transfer them to warmed plates and then repeat with the remaining batter mixture.

An Aberdeen computer science student from Aberdeen University called James Provan became an overnight internet celebrity when he amassed many hits to his pancake video on You Tube about how to make pancakes in 2006. It has had over 2.5 million viewings at youtube.com Two years later he was back with a new one, specially commissioned by Tate and Lyle. This one is a step by step pancake recipe and demonstration on how to easily cook pancakes and can be seen at welovepancakes.com which includes a history and favourite toppings.

Pancake Day, or Shrove Tuesday, is celebrated before Lent.

It is estimated that about 43% of Scottish folk do not celebrate it.