This haggis stuffed chicken recipe is from the chefs at Sainsbury's and was created during their Eat Britain campaign. Using organic and free range poultry will enhance the flavour. This stuffed chicken breast recipe can be served with a whisky cream sauce. This is known as Balmoral Chicken here in Scotland. This will serve 4 people. 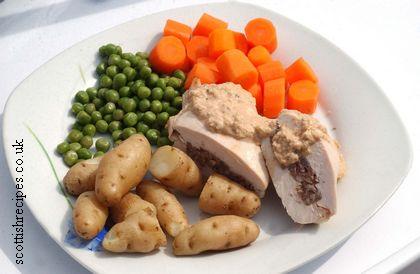 
Buy fresh Chicken Balmoral online with delivery to your door.


Taste Ye Back: Great Scots and the Food That Made Them uses additional ingredients that include dried fruit such as apricots, dates, prunes and saltanas.


Make a slice lengthwise into each breast, being careful not to go right through, to form a cavity for stuffing.

Stuff the space in the breasts with 50g of haggis for each. If smaller ones are used then fill with less.

To prevent the poultry splitting during cooking this stuffed chicken recipes on this page Scottish Recipes advise securing each one with a couple of cocktail sticks.

Seal on all sides in a frying pan with a little oil.

Place onto a baking tray and cook for 30 to 35 minutes until cooked through and juices run clear.

Meanwhile add the finely chopped shallot to the pan in which you sealed the breasts and soften without colouring.

Add the cream and a good spoonful of whole peppercorns and cook for 3 to 5 minutes. A few mls of whisky could be added at this stage to enhance the flavour.


Serve with the peppercorn sauce poured over and some seasonal vegetables as in the photo above.


We would like to thank Sainsbury's for these stuffed chicken breast recipes and photograph which formed part of their Eat Britain campaign. To read more about it visit the Scottish Cooking And Recipes From Scotland page.