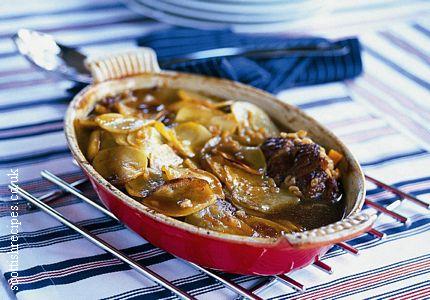 This will serve four people. Though not a traditional Scottish dish it is often served in our restaurants. It is also known as traditional Lancashire hot pot or lamb and leek hotpot, though this uses different vegetables. In addition to this version there are also Irish lamb hot pot recipes available.

which uses additional ingredients such as sheep's kidneys and chopped mushrooms.


How To Make Lamb Hot Pot

2). Lightly cook the vegetables, garlic and rosemary in 50g of butter. Then remove from the pan and set aside.

3). Melt the remaining butter in the pan and brown the chops on each side. Then remove from the pan.

4). Add the white wine. Boil and reduce until almost dry.

5). Add the stock and bring to a boil. Place the chops into a shallow braising dish and cover with the vegetables. Season with salt and pepper.

6). Lay the sliced overlapping potatoes onto the chops, pour over the stock, and place into oven for 1 hour. Be sure to baste the potatoes every 15 minutes.

The book The Complete Book of Mince


We would like to thank the team at Albert Bartlett for providing this Lamb Hot Pot recipe and photo on behalf of Andrew Fairlie. The potatoes recommended are Rooster potatoes which are available from most Scottish supermarkets. You can learn more about Albert Bartlett and access more meal ideas at their website www.albert-bartlett.co.uk