Cock a Leekie Soup is a delicious winter warming dish from Scotland often served as a starter at Scottish events such as Burns Night, St Andrews Night and as a Hogmanay treat. It dates back to the 16th century when a fowl would be boiled with vegetables such as leeks to provide a filling broth and this is why it is so named. 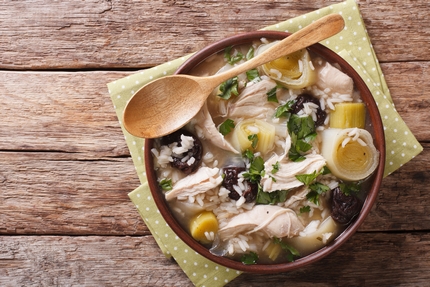 A traditional Scottish Cock a Leekie soup recipe includes prunes though some cooks will leave the prunes out because they are not to everyone's taste. Other chefs will include the prunes in the cooking but will remove them before serving.

has an Avocado cock-a-leekie recipe. 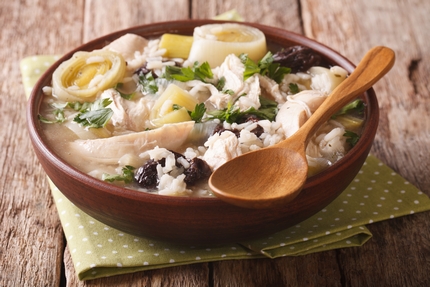 
One whole chicken or several pieces of uncooked and boned wings, legs or quarters
400g of leeks
100g of precooked prunes that have had their stones removed
25g of rice
2 litres of water or soup stock
One teaspoon of brown sugar
Seasoning of salt and pepper, one bay leaf and some thyme
Parsley for the garnish

Place the chicken into a large pot and add the stock or water. Bring to the boil. As any fatty scum appears at the top of the pot remove and discard.

Wash the leeks and roughly chop into about 2cm pieces, using the green and white pieces, though some cooks prefer just to use the whites of the leeks. Once the chicken or pieces have been boiling for about one hour add the chopped leeks and the herbs of bay leaf and thyme and bring back to the boil and then simmer for two hours. The salt and pepper if used can be added at this stage of the recipe for Cock a Leekie soup. If used the bacon should be thinly chopped.

The book Scots Cooking: The Best Traditional and Contemporary Scottish Recipes by Sue Lawrence suggests serving the broth in bowls whilst serving the chicken on a platter and carved at the table to be put into the soup depending on the taste of each person. Sue recommends avoiding over cooking the chicken to avoid tough meat.

During the simmering if the water goes down and the fowl or leeks are exposed then top up the water or stock.

Test to see if the poultry has cooked by piercing the skin with a fork. No blood should come out and the fork should pierce the flesh easily.

Take out the chicken, giblets or pieces and the bay leaf. Set aside and save some pieces to serve. The rest of it can be used for other recipes, such as a Cock a Leekie pie or even given to the dog as a treat which is what we do!

Add the rice, there is no need to cook it separately as it will cook during the simmering. If you are using the traditional way to cook Cock a Leekie soup then drain the prunes of their juice and add the sliced prunes. Simmer for about thirty minutes. Once all the ingredients have cooked then add some thin chicken strips to the pot. Simmer for about ten more minutes and then serve with your favourite bread and garnish with some chopped parsley. 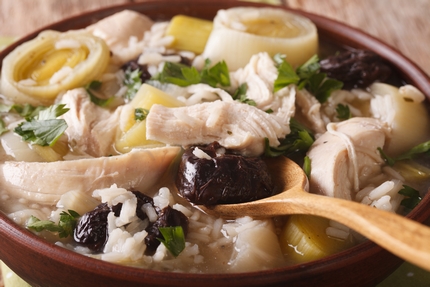 The Book Maw Broon's Cookbook has another traditional Scottish Cock a Leekie soup recipe which suggests using an old boiling fowl with giblets. It also includes a Feather Fowlie recipe that uses chicken, ham and celery. Buy Maw Broon's Cookbook at a discounted price and with free delivery available.

The book The Scots Kitchen by F. Marian McNeill has a cock-a-leekie soup recipe that can be made on an open fire.

The book A Cook's Tour of Scotland by Sue Lawrence has an easy to make Cock-a-Leekie risotto with bacon recipe which is adapted from the dish used at the Highland Cottage Hotel and Restaurant in Tobermory.