The blue background with a white diagonal cross is the national flag of Scotland and is often called the saltire or the St Andrew's Flag after The Patron Saint of Scotland. 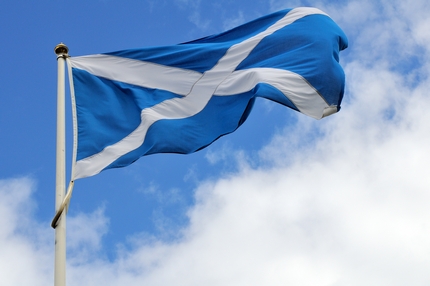 
St Andrew was one of Jesus' apostles who taught The Gospel throughout Scythia, Epirus and Achaia. He was crucified in Patras, Achaia where he preached to the crowds for 2 days - managing to convert many listeners before dying. He thought himself unworthy to be crucified in the same way as Jesus and requested to be crucified in another manner - hence the shaping of the white cross. He is also the patron saint of Russia. 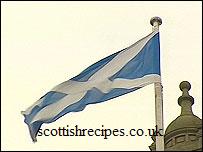 Legend has it that St Rule (Saint Regulus), was charged with the safe keeping of St Andrew's relics after experiencing a vision in which he was told to take certain of his bones to the most westerly part of the known world by an angel. This he did at a place called Kilrymont, where he built a church and became the first bishop - the town later became known as St Andrews. St Andrew's day is celebrated on the 30th of November.


In 832AD Angus MacFergus the High King of Alba was defending the land with his army of soldiers against an English invasion lead by Northumbrian warrior Athelstane. Thinking that they were facing a superior force King Angus began to pray. He thought his prayers had been answered when he saw a saltire shape in the clouds of a white St Andrew's Cross on the blue sky and promised that if they won the day with Saint Andrew's help, he would be adopted as Scotland's patron saint. The Scots won the battle and from that day it became the national flag of Scotland and the emblem of the Scottish people.

In the churchyard at Athelstaneford, East Lothian, it always flies and is floodlit at night.


By 1286 the seal of Scotland bore the crucified image and the saltire appeared in coin by about 1350. By 1385 an Act of Parliament bade that any Scot's soldier invading England would wear a white St Andrew's cross. This lead to many Chieftains adopting it to their family arms and standards. By 1500 it started to appear on flags at sea and on the land.

In 1542 the Royal Arms of James V featured the saltire. It became the national flag whilst at sea in 1606 which also saw the first Union flag combining St George's and St Andrews.

Most modern buildings that host flags have the Union Jack and the St Andrew's flag flying side by side.

The saltire is said to be one of the oldest national flags of any country.

There is no official shade of blue laid down - dark blue and pale sky blue has all been used. Nor is there an official size - although a ratio of 5:3 is generally used.