This salmon pasta recipe is lovely and filling and great for a winter meal. It is ever so easy to make. 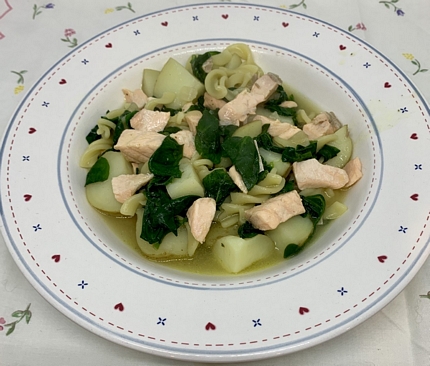 Your favourite mushrooms can also be added and different pasta, such as fusilli can be used.


1. In a large pan heat the oil and add the onion and cook for 1-2 minutes. Add the garlic, tatties and the chilli. Stir and add the vegetable stock.


2. Simmer until the tatties are almost soft.

3. In a separate pan fully cook the macaroni in boiling water then drain the water.


4. Add the spinach and cooked macaroni to the macaroni pan and mix well. Add this mixture to the tatties and vegetables, then stir in the fish.


5. Simmer for about 5 minutes or until the fish is cooked.


See also the Salmon on a bed of spinach and mushrooms with roasted vegetables recipe.