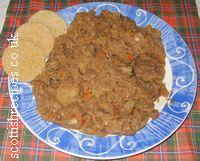 Stovies is traditionally a left over dish from the Sunday Roast, using the tatties, meat and dripping leftovers all thrown into one pot. The origins are said to come from a time when masters would give their servants the left over food from Sunday lunch. They would take this home or to their quarters and make a dish that could last them all week and was easy to cook.

has a delicious goose fat stovies recipe which is ideal for the leftover goose fat from Christmas roast potatoes.


The National Trust for Scotland book The Scottish Kitchen by Christopher Trotter describes where the meal gets its name which is from the French word etuve which means to cook in its own juices. Other names include Stoved Potatoes.

It can be cooked on the hob or in the oven (gives a nice browned crispy coating). There are various Scottish stovies recipes depending on taste. The amount of stock used can vary and really depends on how moist you prefer the dish. Meat used varies from chicken, beef and lamb. Some people use tinned corned beef. The best I've ever tasted is at Mrs Bridges in Peterhead who use beef. It is best served with oatcakes. Below is my mum's, cooked the day after the Sunday Roast.

The book Scots Cooking: The Best Traditional and Contemporary Scottish Recipes by Sue Lawrence describes the English equivalent as being a dish called Pan Haggerty which is cooked in the North East of England. Pan Haggerty is slowly cooked in dripping in a deep covered frying pan and consists of sliced onions and potatoes and would traditionally be served on a Monday after the Sunday roast.


The book The Complete Book of Mince

has a stovies recipe with additional ingredients such as diced turnip and sliced carrots.


1. Add a wee bit of lard to a pot and gently cook the onions until soft. Add the beef (chicken/lamb can be used if preferred). Add salt and pepper.

has a healthier stovies recipe that uses sunflower oil rather than beef dripping.

2. Cover with tattie slices and cover with the stock depending on how moist you prefer the meal. We add a wee bit and top up as required.


The Book Maw Broons Cookbook has a beef stovies recipe taken from the Housewife Weekly cut out and keep Scottish Recipes collection. It uses turnip and carrots as optional ingredients and varies slightly from our ingredients in that it uses nutmeg, more onions and cooked lamb or mutton though does suggest meat alternatives of beef, lamb or fish. Buy Maw Broon's Cookbook at a discounted price and with free delivery available.

It also has a stoved tatties recipe which is much like a vegetarian stovies recipe that uses just potatoes, butter, onions, pepper, salt and water as its ingredients.


How to Make Chicken Stovies

Heat a small amount of oil into a large pan and fry the chopped onion until it turns brown.

Add the chopped chicken and potatoes.

Fry for several minutes until the chicken and the tatties turn a light brown colour.

Add the chicken stock and simmer until it becomes absorbed. The potatoes should appear cooked and this can be tested by breaking them with a fork. The tatties should easily crumble.

Turn off the heat, sprinkle with parsley and serve.

As an accompaniment serve with traditional Scottish vegetable recipes such as Rumbledethumps and Clapshot if you do not mind another potato dish. Whichever you choose do serve with a side serving of Skirlie.

A wonderful pudding to serve afterwards is Cranachan.


Another chicken stovies recipe is in The National Trust for Scotland book The Scottish Kitchen by Christopher Trotter which is called Stoved Chicken.


The book The Scots Kitchen by F. Marian McNeill has fish stovies recipe called limpet stovies which originates from the Isle of Colonsay.

Stovies canapes were served to the guests of Dragon's Den star Duncan Bannatyne during the BBC 2 program Out of the Frying Pan by James Knight-Pacheco and Alasdair Hooper. They were the second place contestants in The Restaurant in 2008. Other Scottish canapes produced by James Knight-Pacheco and Alasdair Hooper included haggis canapes and Arbroath smokies canapes.


Best Stovies In The World Competition

In October 2007 cooks in Huntly, Aberdeenshire launched a campaign to find the best stovies recipe during their annual Huntly Hairst Halloween and Food Festival. The Best stovies in the world competition is open to anyone in the North East of Scotland and worldwide.

It is being led by the chef at Park lane restaurant in Huntly, Margaret Paterson. Cooks were asked to bring their samples in a flask or food container to reheat at the venue where celebrity food critic Nell Nelson will judge them.

Nell Nelson will be familiar to television viewers from the TV series The Woman Who Ate Scotland where she cycles around Scottish cafes, restaurants and food suppliers sampling Scottish food and drink. It is hoped that the best stovies in the world competition will help put Huntly on the map as the stovies capital of Scotland and the UK.

The judging for the campaign took place on Saturday 4 November 2007. Strict criteria for entry was that Scottish beef must have been used - no corned beef permitted!

Journalist and Radio Scotland presenter Edi Stark describes a stovies recipe in Taste Ye Back: Great Scots and the Food That Made Them which is made from lamb and served with thyme roasted beetroot and oatcakes.