This serves 4-6. Rhubarb sponge isn't an exclusive Scottish dish, but it's my favourite pudding that my mum and wife makes me. So it deserves a special mention! I love mine warm, served with vanilla ice-cream. 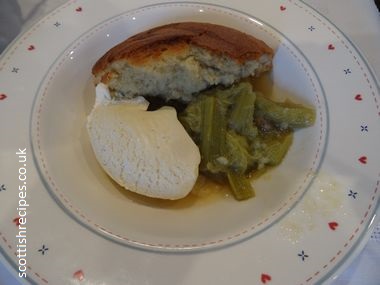 1. Stew the fruit until it is soft and leave in a dish to cool.

2. Make the sponge by creaming the margarine and sugar then adding the eggs and flour.

3. Put the mixture on top of the fruit.

5. Serve hot with your favourite topping or on its own.


Taste Ye Back: Great Scots and the Food That Made Them describes the old Scottish practice by children who used to dip rhubarb sticks into bowls of white sugar, with many of the contributors wondering if this is why their generation have bad teeth and many fillings!


Below are details of some more rhubarb recipes enjoyed by us:


The Three Chimneys Recipe Book has two easy and delicious rhubarb recipes which are rhubarb and stem ginger parfait with ruby orange syrup and an alternative rhubarb crumble tart which uses rolled oats and chopped nuts as part of its ingredients.