This is Mrs B's famous windy beef stew recipe - a few hours eating all this vegetable rich dish - the wind fair gets blowing up yer kilt! But don't let that put you off, it's delicious. Even better for hubbies like me who have to do the dishes - it involves only one pot! Mrs B makes a huge potful which we eat for a few days - reheating thoroughly each day. It's a real winter warmer in the depths of the lovely Scottish freeze your nadgers off weather: 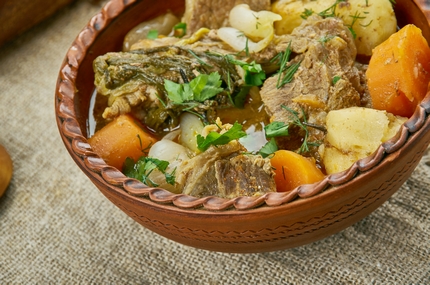 
1. Coat the steak with the flour, keeping any leftover flour.


2. Heat the vegetable oil in a large pot.


4. Add the onion and slowly cook until the onion is tender. Add the remaining flour.


5. Slowly stir in the stock, add the Worcestershire sauce, salt and pepper and continue to cook, stirring until all the ingredients in the pot are blended together and the mixture gets thicker.


6. Put the steak back into the pot, reduce the heat and simmer for about two and a half hours.


7. Add the vegetables, stirring well and bring back to the boil. Reduce the heat, cover and simmer for about 30 minutes or until the steak and vegetables are lovely and tender.


8. Enjoy and watch out for the wind from this Scottish stew recipe!

Delicious served with hot rolls for dunking into the stew and with dumplings added.


A slow cooking overnight stew recipe can be found in Taste Ye Back: Great Scots and the Food That Made Them.

A rich coloured and hearty beef stew recipe can be found in the book Clarissa's Comfort Food by Clarissa Dickson Wright. This uses amongst other ingredients such as stewing steak, bacon, draught cider, black treacle, tinned anchovy fillets and pickled walnuts. For those who do not like suet Clarissa recommends making dumplings in the traditional Jewish way by using chicken fat.

A beef and chestnut stew recipe can be found in Taste Ye Back: Great Scots and the Food That Made Them.