A bird in abundance here in Aberdeenshire. This pheasant casserole recipe can be cooked in joints or whole: 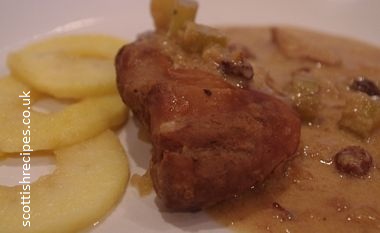 
1. Soak the raisins in the cider/wine for 2 hours.


2. Make stock from the giblets by simmering for about an hour with the carrot, a quarter of the onion and a wee piece of the celery. Sieve before using.

3. Peel/core the apple and slice. Chop the onion and celery finely.


4. Truss/Joint the pheasant, dust with flour and the salt, pepper and spice.


5. Melt the butter, add the pheasant and slowly cook to brown the bird, then drain and set aside.


6. Gently fry the onion for a few minutes, then add the celery and cooking apples and fry for a further 5 minutes.


7. Stir in the remaining flour and cook for a minute.


8. Add the raisins, stock and cider and bring to the boil.


9. Turn this and the bird into a pan, place the lid and simmer for one and a half hours or until the bird is lovely and tender.


10. Lift the bird/pieces out and set aside.


11. If the sauce in the pan is still liquidy then leave the lid off and boil for a wee bit longer to thicken. Add the yoghurt or cream and gently reheat. Pour into a serving dish.


12. Peel and core the dessert apple and slice into fine rings. Gently fry them in the butter and use to garnish.


The Latin name for pheasants is Phasianus colchicusn torquatus in the order of Galliformes. There are 35 species in 11 different genera. They are attractive game birds noted for their large long tails. Males are characterised by strong sexual dimorphism and have rich chestnut, golden-brown and black markings on their body and tail, with a dark green head and red face wattling. Males are much larger than female birds. Females are mottled with paler brown and black.

They were introduced to the UK for sport shooting and are still bred for hunting. They tend to live in wooded areas, the open countryside, thickets, copses and hedgerows where they survive naturally on a diet of shoots, grain and seeds. Though they are found in most areas of Britain they are more prevalent in Scotland.

It has a distinctive kok kok kok call.

Pheasant shooting is a popular sport, especially in Scotland and Northern England and it is common for up to 300 birds to be shot during a shoot. Pheasant shooting season generally takes place from November and generally ends around the 1 February.